After postponing fieldwork in 2020-2021 due to the COVID-19 pandemic, our Southeast Virginia seal tagging project resumed in February 2022! Researchers from the US Navy (NAVFAC Atlantic, NAVFAC Northwest, and NUWC Newport), Atlantic Marine Conservation Society, Marine Mammals of Maine, The Nature Conservancy Virginia, and HDR Inc. were able to tag five harbor seals on the Eastern Shore of Virginia. This brings the total number of satellite tags deployed for this project to 14 since tagging began in 2018. 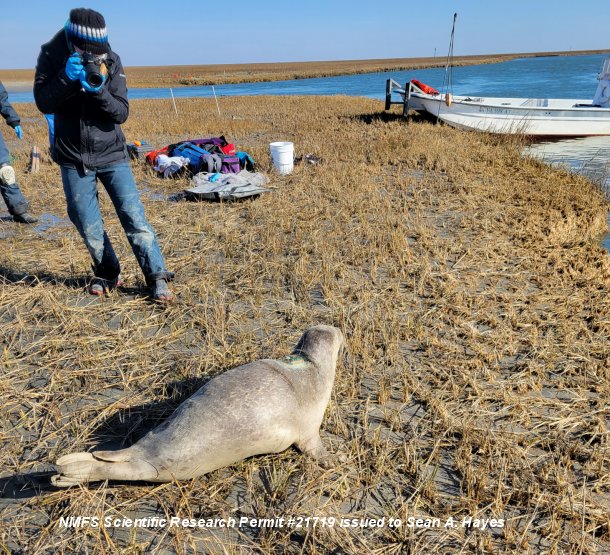 Harbor seal at a haul-out site on the Eastern Shore shortly after a satellite telemetry tag was applied.

The 2022 tags are all currently reporting seal movements within the inland and offshore waters of Virginia. The tags will track the seals’ movements for the next 4-5 months, allowing the seal’s northward migration to be studied as well. The tags will eventually fall off when the seals molt their fur in summer.

On 27 February, our colleagues at Rudee Tours, a local wildlife tour group, were able to spot one of the tagged animals at the Chesapeake Bay Bridge Tunnel (CBBT). This animal is a juvenile male harbor seal. We knew from the Navy’s haul-out study that animals moved between the two main haul-out areas in Virginia (Eastern Shore and CBBT), but it is always interesting to have an actual sighting to go along with the tag data. The seal appeared healthy and was socializing with another young harbor seal. 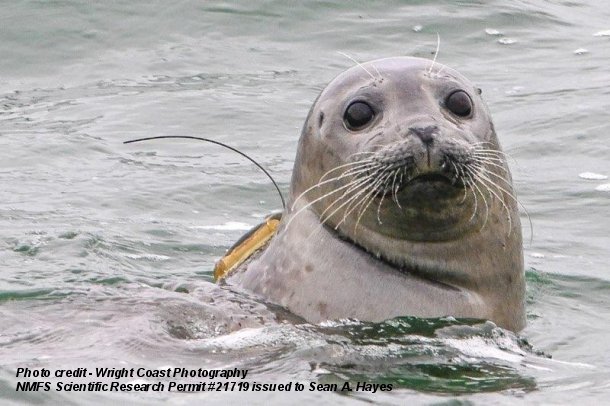 Harbor seal spotted swimming near the Chesapeake Bay Bridge Tunnel about a week after being tagged at one of the Eastern Shore haul-out sites.

Recently, at least two gray seals have also been observed at the CBBT, making it the first time that more than one gray seal has been spotted at the same time for that haul-out location. Check out the project profiles for more information on NAVFAC LANT’s haul-out count, camera trap, and tagging work. 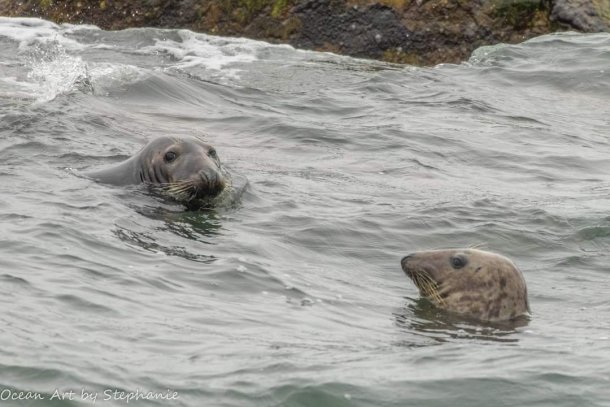 Two gray seals observed in the water near one of the haul-out locations.