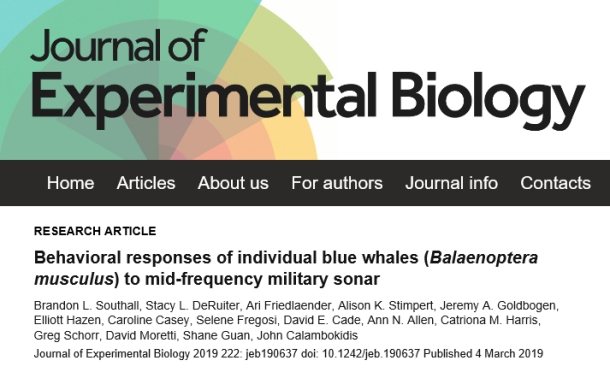 Press release: No one really knows why pods of whales spontaneously drive themselves aground. Military sonar may be one culprit, and the need to train and test submarine tracking technology in open water could put the US Navy in conflict with the gentle cetaceans that feed and pass through military ranges. Although solitary endangered blue whales are rarely victims of sonar stranding, this does not mean that they are unaffected by high intensity sonar. ‘We wanted to understand better what the common behavioural responses are in blue whales when they are exposed to [sonar]’, says Brandon Southall from the University of California, Santa Cruz, USA. So, he and a team of 14 colleagues embarked on a marathon tracking program to investigate the reactions of blue whales to sonar. The team publish their discovery that blue whales stop feeding on deep patches of krill when they encounter sonar in Journal of Experimental Biology at http://jeb.biologists.com.

‘The ocean is a big place and it can be easy to miss and lose even the biggest animals ever on the planet, but, because they are so large and have very tall blows, they are actually among the easiest marine mammals to track’, says Southall.  Admitting that being close to one of these incredible animals can be daunting, Southall explains how the scientists manoeuvred close (~5 m) to the colossal animals in a 6 m inflatable boat to attach the suction tags, which record the animals’ depth, movements and sounds in the water. ‘The driver of the small boat is totally critical’, says Southall, adding, ‘we had one of the most experienced people in the world doing this: John Calambokidis from the Cascadia Research Collective’.

Once the tag was attached and six trained observers were in place to confirm the animal’s movements at the surface, the team generated sonar signals from a boat located about 1 km away for 30 min or an hour. During this time, they monitored the animals’ reactions, first as the sonar became louder and then after the noise ceased. In addition, Ari Friedlander and Elliot Hazen used echosounders to track krill – the whales’ favourite delicacy – when conditions in the vicinity permitted, to get a better idea of when and where the whales were in relation to their dinner.

After successfully recording the responses of whales to 42 sonar tests over 5 years, Stacy DeRuiter, led a team analysing the information logged by the tags, which Southall then combined with observations at the surface, to look for patterns and potential changes in the whales’ behaviour.

Intriguingly, the majority of the deep-diving whales stopped feeding when the sonar signals started up; however, the whales near the surface generally didn’t respond at all, even when the sonar was loud and nearby. In addition, some of the animals that had stopped feeding turned and headed away from the sonar emitter, although most resumed their activities soon after the sonar stopped. Southall admits that he was surprised by how different the whales’ reactions were. ‘Some whales responded when the sound was barely audible, while others seemingly ignored it and kept feeding at quite loud levels’, says Southall, which is a ‘really big deal’, he adds. ‘The current management approaches rely very heavily on the amplitude level [volume] to predict response’, he explains. However, the activity that the whale is engaged in seems to have a larger impact on the degree to which the sonar disrupts its behaviour.

Considering the effects of sonar, Southall suggests, ‘Impacts could be minimized by reducing sonar disturbance during periods of blue whale foraging on deep patches of krill in the military’s main training areas’. He and his colleagues are also keen to learn how the animals determine the proximity of a sonar source, to decide when it’s time to stop feeding and flee.