An interesting sighting was made on 20 October 2014 during a line transect marine species monitoring survey in the W-50 Mine Neutralization Exercise (MINEX) training area off Virginia. Observers encountered a large group of approximately 190 bottlenose dolphins which included one individual that was almost completely white in coloration.  This individual was an adult and appeared robust and otherwise healthy. 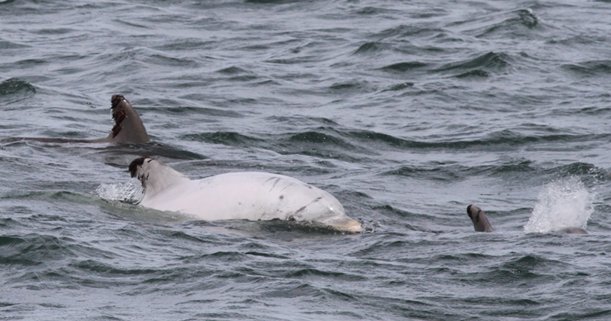 This project, led by HDR Inc., began in August 2012 and focuses on gathering baseline information on the occurrence, distribution, and density of marine mammals near Naval Station Norfolk (NSN) and adjacent areas. The MINEX training area is located just off the coast of Virginia Beach, VA. A full report on the first year of effort, can be found in the Reading Room.

Leucism, like albinism, is a genetic condition that results in a lack of pigmentation in the skin.  Unlike albinism, in which animals usually lack all melanin and have red eyes, leucistic animals tend to retain some pigment in their skin and often have dark, normal colored eyes.

This unique individual, and other dolphins from this group, will be compared to dolphins within the local photo ID catalog as well as the Mid-Atlantic Bottlenose Dolphin (MABDC) Photo ID catalog to learn more about site fidelity and movements of bottlenose dolphins in this region.