On 19 August 2022 during an offshore vessel survey conducted under the U.S. Navy’s Marine Species Monitoring Program, researchers from HDR encountered a pair of Cuvier’s beaked whales (Ziphius cavirostris) 72 NM off Virginia Beach, Virginia. Photographs were collected of the male / female pair and the research team stayed with the group through three surfacing bouts.

The following day, photographs of the pair were shared with our colleagues at Duke University who maintain a catalog of Cuvier’s beaked whales from their research efforts off Cape Hatteras, North Carolina. Danielle Waples compared the two individuals to their catalog, and was able to identify the female as Zca107, seen by their research team on 9 August 2020. This was the only sighting of the female, who has a distinctive dorsal fin shape and trailing edge notch. The male had not been previously identified but was added to their catalog. The sightings occurred just over 2 years apart, approximately 62 NM from one another. 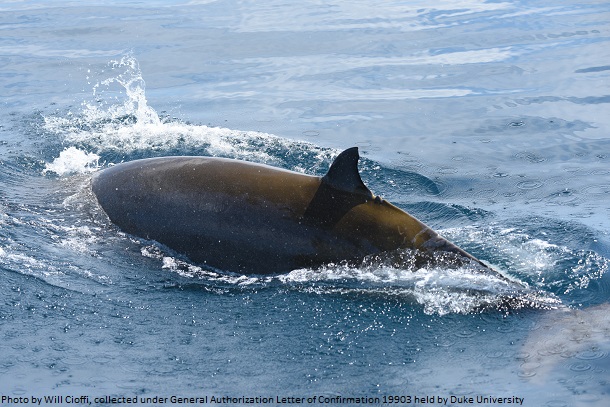 This is the first photo-ID match of Cuvier’s beaked whales between these regions, although tag movement data has shown that multiple individuals tagged off Cape Hatteras have moved into Virginia waters (e.g. Foley et al. 2020).

These multi-year sightings are a valuable component of long-term photo-ID efforts. For additional information on these projects see Waples and Read 2021 or Engelhaupt et al. 2021. 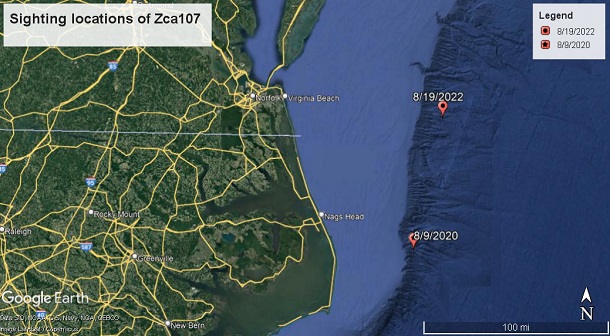