We recently shared drone footage of a blue whale feeding east of the continental shelf break (Drone footage of a blue whale off the coast of Virginia!). The HDR team made the sighting during a vessel survey for the VACAPES offshore cetacean study and were able to deploy a satellite-linked telemetry location/dive tag on that animal. The tag collected data over eight days and is the first blue whale tagged in the region.

The map below shows the track of the whale during the eight days. There were several days of stormy seas during the time the tag was active, which can affect how often data is received from the tag, so this is not a complete track of all the whale’s movements. However, the whale moved in a large circle between North Carolina and Virginia, all within 40 miles of the original sighting and tagging location. It mainly stayed off the shelf break, crossing onto the continental shelf for a short time south of Norfolk Canyon. The whale traveled through waters that ranged in depth from 40 m to 2700 m (131 to 8858 feet). The tag also records dive data, and the whale’s average dive depth during these eight days was to 31.3 meters (~103 feet). 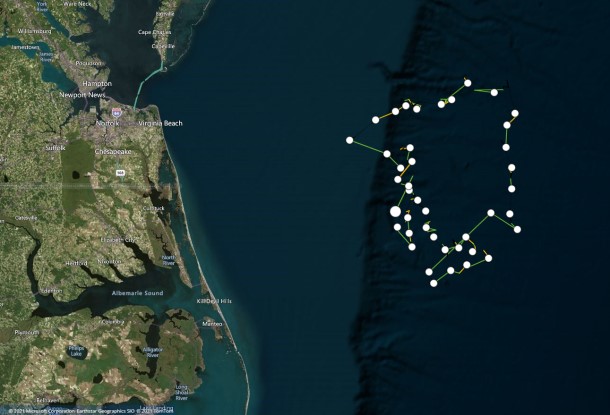 This is only the third blue whale seen during these offshore surveys over the past 4 years (the team published a paper last year describing the prior two sightings; Engelhaupt et al. 2020). One of those two whales was matched using photo identification to a sighting in the Gulf of St. Lawrence. The other individual did not match to any other photo ID catalogs, and neither was this most recent blue whale sighting.

Two other blue whales that were tagged in the Gulf of Saint Lawrence have made trips down to the Mid-Atlantic coast (Lesage et al. 2017), however the movement patterns of all three tagged whales while in the region are very different. The small amount of data in the Mid-Atlantic from previously tagged whales showed they mainly transited through the area (with some potential feeding further south), whereas this whale was seen actively feeding. It will be interesting to look more closely at the data from this tag and gain more insight into how blue whales utilize Mid-Atlantic waters.

Drone footage of a blue whale off the coast of Virginia!