After a frustrating summer marked by very poor offshore weather conditions, everything came together in early August for a successful Controlled Exposure Experiment (CEE) with tactical mid-frequency sonar signals deployed by the USS Farragut. A brief weather window allowed the field team to deploy five satellite-linked dive recorders on Cuvier’s beaked whales Ziphius cavirostris on 4 and 5 August, adding to two tags that were deployed in late June. 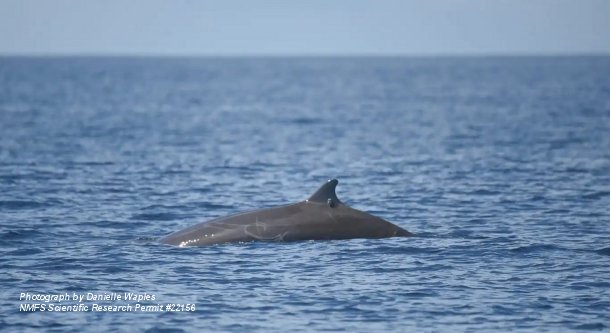 Zc133, one of five Cuvier’s beaked whales tagged on 4 and 5 August, 2022. Photograph by Danielle Waples.

On 07 August the team relocated one of the satellite-tagged beaked whales, Zc135, just off the shelf break at "The Point", 40 nautical miles east of Cape Hatteras, and a Digital Acoustic Tag (DTAG) was deployed on Zc22_219a, one of the two whales with Zc135 at approximately 10:00 local time from the R/V Barber. DTAG placement was good – on the right flank just forward of the dorsal fin. The two tagged animals separated shortly after the DTAG was deployed and a chartered fishing vessel was used to monitor Zc135 while the Barber followed Zc22_219a. 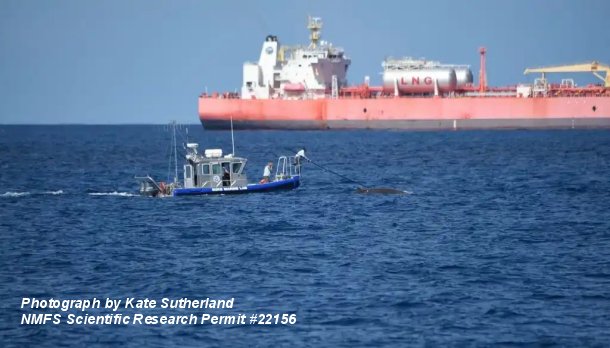 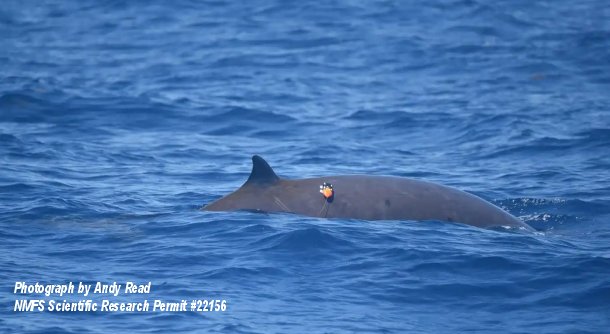 The CEE was flawless, lasting from 13:10 to 14:10 local time, with the Farragut initially positioned approximately 15 miles from the two focal whales. Both whales submerged shortly before the CEE commenced. The DTAG on Zc22_219a was programmed to last for a 24-hour deployment, but there is always a risk that it could jettison early and be advected away from the study area by the Gulf Stream. 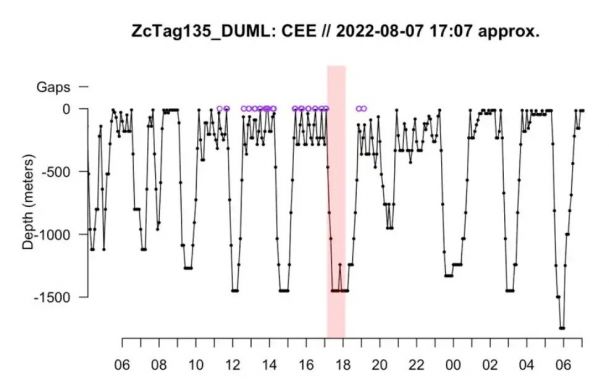 Dive profile from Zc135 before, during (pink shading) and after the CEE on 7 August, 2022. Time in GMT. Preliminary data.

The next morning, Zc135 was relocated using another chartered fishing vessel. The Barber commenced searching for Zc22_219a and at 10:45 the VHF signal from the DTAG, which had been jettisoned on schedule and floated to the surface, was detected. The DTAG was tracked for three miles and recovered, with 24 hours of data onboard, just after 11:00. 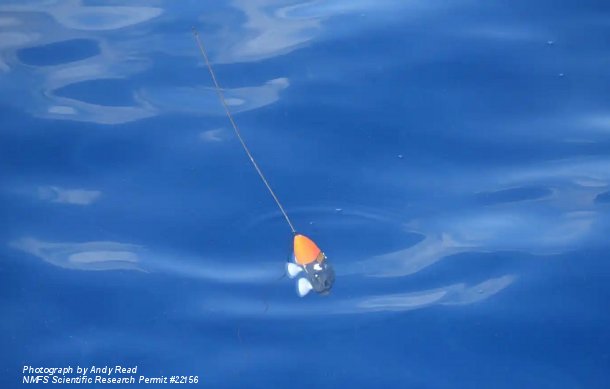 DTAG floating at the surface in the Gulf Stream just prior to retrieval on 8 August, 2022. Photograph by Andy Read.

We are currently in the process of examining the rich trove of data from this successful CEE. Field experiments like this one are complex and challenging and we are very fortunate to have a highly skilled field team, including Zach Swaim, Daniel Webster, Danielle Waples, Danielle Alvarez, Kate Sutherland, Annie Harshbarger, and Dr. Will Cioffi. This is the second CEE we have conducted with the Farragut and we are very particularly grateful for the commitment and skill of its crew and officers. Our work is conducted under Marine Mammal Protection Act permits issued by the National Marine Fisheries Service and is funded by U.S. Fleet Forces Command, as part of the U.S. Navy’s Marine Species Monitoring Program, managed by Naval Facilities Engineering Systems Command Atlantic and supported by HDR Inc. 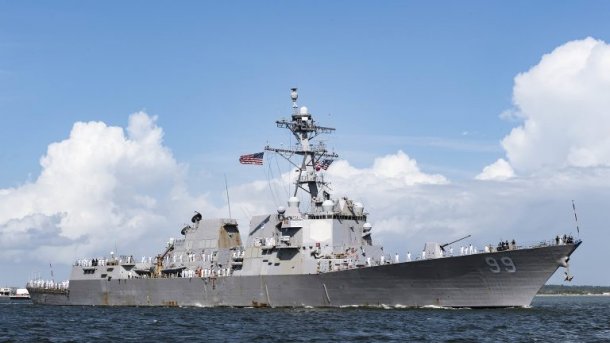 The Arleigh Burke-class guided-missile destroyer USS Farragut (DDG 99) participated in this most recent CEE. Read more about the Farragut's support and the project in this recent press release by U.S. Fleet Forces Command.